We're LIVE! Join us as we stream BAC Activities

For years now, rapid growth of commuters and vehicles population have plagued Metro Manila, the center of Philippine socio-economic and political activity. Heavy traffic, pollution and all the attendant undesired results are problems that Metro Manila have to contend with daily.

A case in point is on EDSA, a 24-kilometer stretch from MacArthur Highway at Caloocan City in the north of Metro Manila to Roxas Blvd., Pasay City, south of Metro Manila.Considered one of the world's highest volume thoroughfares, EDSA is a semi-circular ring road link with several radial roads leading to the metropolis' social, economical and political centers. The avenue cuts across the cities of Caloocan, Quezon, Mandaluyong, Makati, and Pasay and bounds Pasig City and the town of San Juan.

EDSA's importance to the lives of more than eight million people - or 12 percent of the country's 68 million citizens who live in Metro Manila cannot be underestimated. Added to the metropolis' growing population are the transients and migrants who come to live in Metro Manila in search of opportunities. Every birth, transient or migrant, is a potential commuter who will likely join more than the 2.8 million people already using EDSA.

At the same time, every birth, and transient or migrant, is also a potential car owner likely to occupy 4.6 meters by 2.7 meters, the average car area of street space. The fast pedestrian and vehicle population growth has become a major headache for metropolitan planners who concede that Metro Manila's road, which comprise less than 10 percent of the country's network, cannot adequately accommodate pedestrian and vehicular traffic. Streets in the metropolis expand by less than two percent annually.

Statistics add that traffic has caused the loss of over P15 billion yearly due to lost man-hours, repairs and maintenance and lost fuel. Added to these are unquantifiable discomforts to commuters and vehicle owners undergo when they travel through major streets.

At worse, heavy traffic is taking its toll on the nation's social and economic build-up. Traffic in Metro Manila is expected to nearly resemble nerve-wracking conditions in Bangkok, Thailand and in other parts of the world. Experts agree that a long term solution, beyond just keeping vehicles off the streets, is imperative. One of the solutions that the government sponsored was the establishment of the EDSA MRT3 System.

To provide an adequate, regular and faster mode of transport service along EDSA by operating a safe, efficient and reliable light rail transit system designed to meet the standards of service, quality and customer satisfaction; create opportunities for community development; attain fiscal independence and economic growth; in order to contribute to national stability and prosperity.

The Metro Rail Transit 3 (MRT3) is the cornerstone of the Department of Transportation & Communication's integrated strategy to alleviate the chronic traffic congestion experience along the EDSA corridor. The Metro Rail system is designed to carry in excess of 23,000 passengers per hour per direction, initially, and is expandable to accommodate 48,000 passengers per hour, per direction.

The DOTC awarded a contract to Metro Rail Transit Corporation (MRTC) to build, lease and transfer the Metro Rail Transit System, under the BOT laws of the Republic of the Philippines. The scheme required the DOTC to hold the franchise and run the system particularly the operation and the collection of fares. The MRTC built the system, maintain the same as to guarantee the availability of the trains at specified headway at specified hours, as well as to procure the required spare parts, the DOTC pays MRTC monthly fees for a certain number of years.

MRTC financed the construction of the EDSA MRT3, a 16.9-kilometer modern rail system to stretch along EDSA's 10.5-meter median from North Avenue in Quezon City to Taft Avenue, Pasay City.

MRTC obtained financial closing, with the help of international financial consultant JP Morgan, for loans worth US$ 465 million P 12.32 billion) from the Bank of Tokyo-Mitsubishi, and Japan Export-Import Bank (JEXIM); the Postal Bank of the Czech Republic and Czech Export Credit Agency; and a group of local banks on October 17, 1997.

The loans are backed by the government through a sovereign undertaking, as agreed with the Department of Finance, to cushion risks to investors and creditors.

MRTC was responsible for the design, construction of the EDSA rail transit system. This included the supply of the light rail vehicles, track, signaling, communications, power distribution, and the furnishing of other necessary equipment, facilities, and spare parts. MRTC was also responsible for constructing the necessary civil works for the system including fixed guide-ways, passengers stations, power substations, LRV storage depot and maintenance facilities, and other facilities required to make the light rail transit system operational.

During the construction phase, DOTC exercised the technical supervision of the project activities covered by the contract between DOTC and MRTC, and inspected and checked whether the project was constructed in accordance with the approved plans, specifications, standards and costs.

The Department employed the services of SYSTRA, a French consultancy firm, with technical competence, experience and track record in the construction and operation of railway systems.

To enumerate, the following are SYSTRA's role during the EDSA MRT3 Project Implementation;

The rail project has a fleet of 73 Czech-made modern and air-conditioned rail cars, of which up to 60, in three-car trains, will be operating daily during hours. The trains were built by CKD Doprovni System of Prague, the Czech Republic. The rail vehicles are articulated, eight-axle, three-section cars, designed for single-ended operations.

Each rail car is provided with five double leaf, electronically-operated, plug-sliding doors. The three center doors have an open width of 1,255 millimeters (mm.) while the two end doors, 861 mm. Each train can seat 80 passengers and carry, under crush loading conditions, 394 commuters at any one time. The MRT3 trains can carry 23,000 passengers per hour per direction daily.

The trains run at a maximum speed of 65 kilometers per hour, enough to cover the rail system's tip in about 30 minutes, including short dwell times of about 25 to 35 seconds in each of the system's 13 stations. They run over standard rail tracks. 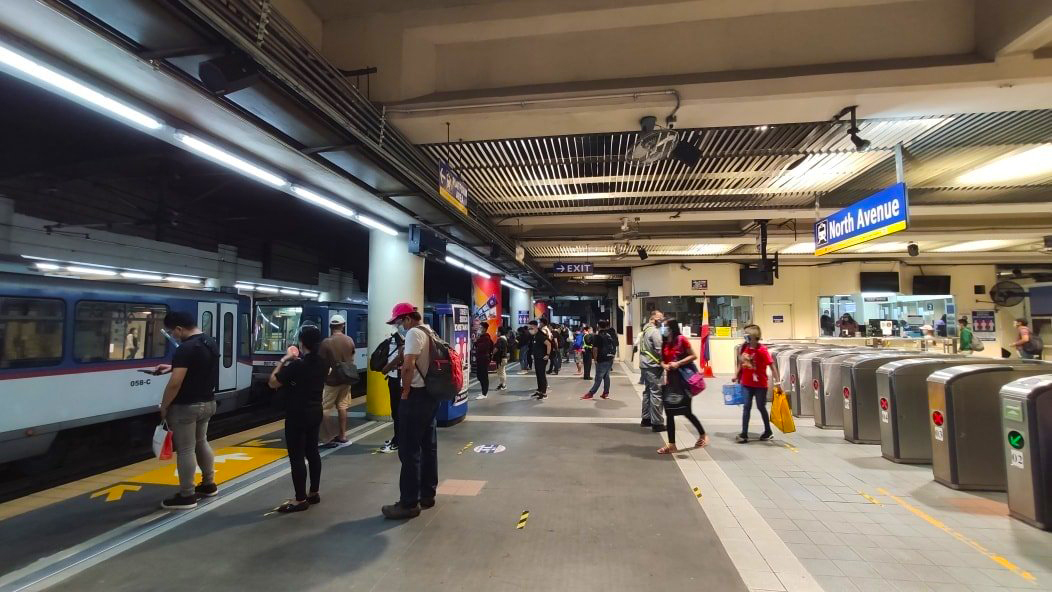 Stations are averagely spaced 1,300 meters apart; with the closest spacing about 730 meters and the farthest, 2,210 meters, all providing basic disabled friendly and commuter responsive facilities such as platforms, view-decks, elevators and escalators, public crossings and other amenities.

Each station's concourse area is divided into paid and unpaid sections. The paid section is a secured area accessible only to MRT passengers who have bought and inserted a fare ticket in any of the entry gates. The unpaid section is the public section where ticket vending and other commercial vending machines, rail travel and other local transportation information boards, and advertising panels and pedestals are located.

Safety has been stressed in all stations, which are equipped with a modern communications system, closed circuit television for security monitoring, public address system, fire stand pipes and hoses and wash down bibs.

The underground Depot maintenance complex has a total area of 84,444 square meters located at the 16 hectare North Avenue Extension in Quezon City. It serves as the headquarters for light and heavy maintenance and operation of the system. 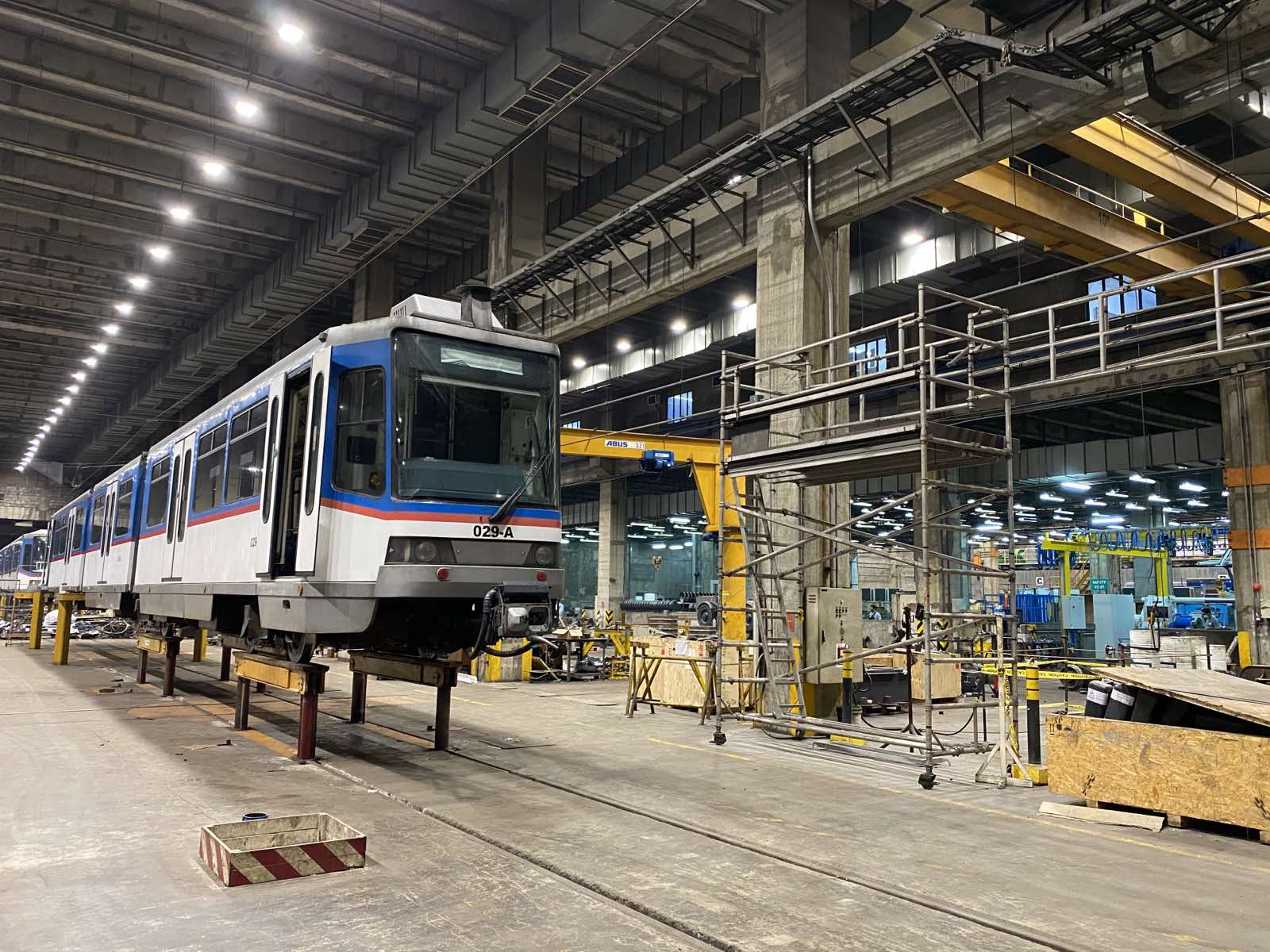 A spur line connects the depot with the mainline rail tracks, providing ingress and egress for the movement of rail cars from both points. The stabling, which is the temporary storage for revenue vehicle is composed of 9 tracks which is capable of storing 81 rail cars with space provided for the storage of 40 additional rail cars in the future.

Major equipments for Rolling Stock Maintenance are found on the MRT3 Depot: 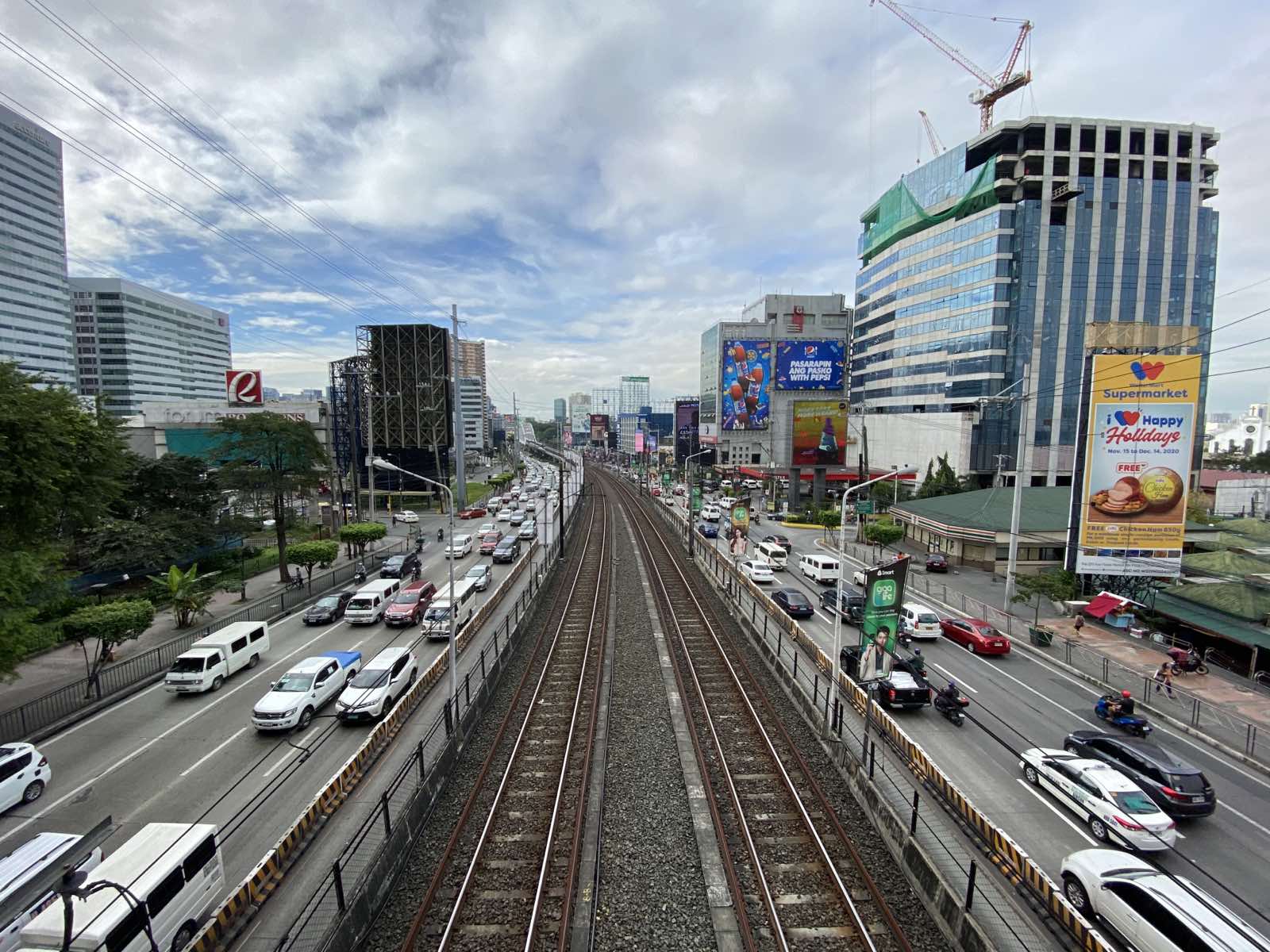 ATP (Automatic Train Protection) System is a computer based interlocking and signaling and Track Circuit with the Central Control and Monitoring located at the Control Center in North Avenue Station. The Mainline is divided into 3 local areas, each has a MAN900 computer, an Ebilock 950 Interlocking computer and a back-up Ebilock 950, and a Field Engineering Unit Computer. All areas are controlled by a central MAN 900 computer. The whole line is viewed in NR display computer.

Overhead Catenary System
The Overhead Catenary System being used is based upon range of aluminum components procured from Adtranz of Germany. Other components were sourced from Siemens in Germany and Arthur Flurry in Switzerland. These components represent a proven technology and has been used widely on rail transportation in Europe. Conductors, clamps and mast were sourced from Australia and Europe with a number of components being manufactured locally. The system consists of an overhead contact system electrified at 750V DC. Power is drawn from MERALCO network at 34.KV phase 60Hz and reduced to 750V DC at the traction power substations.

MRT3 is operating an Automatic Fare Collection System (AFCS) which utilizes contactless cards as fare medium. The system uses a distance-based fare collection. The Automatic Exit Gate deducts and computes the trip and records pertaining data on the card. The Gate can handle up to 30 passengers per minute.

Station Automatic Gates
Segregates the unpaid and paid areas of each station, and provide the check-in and check-out functions for the contactless cards. A total of 195 units are installed for the whole system.

Point of Sale Terminals
Primary means of interfacing with contactless cards. A total of 81 units are installed for the whole system.

Ticket Vending Machines
Automates sale and dispensing of SJTs and SVCs, as well provide SVC-specific services such as card status inquiry and Add Value/Top-Up. A total of 28 units are installed for the whole system.

Station Computers
Serves as the central hub of all AFCS devices within each station. A total of 13 units are installed for the whole system.

Monitoring and Control Workstation
Provides access to monitor and control all station equipment throughout the line. One (1) unit is installed for the whole system.

Central Computer Station
Provides access to control and monitoring of line-related functions such as generation of reports and parameter updates. One (1) unit is installed for the whole system. 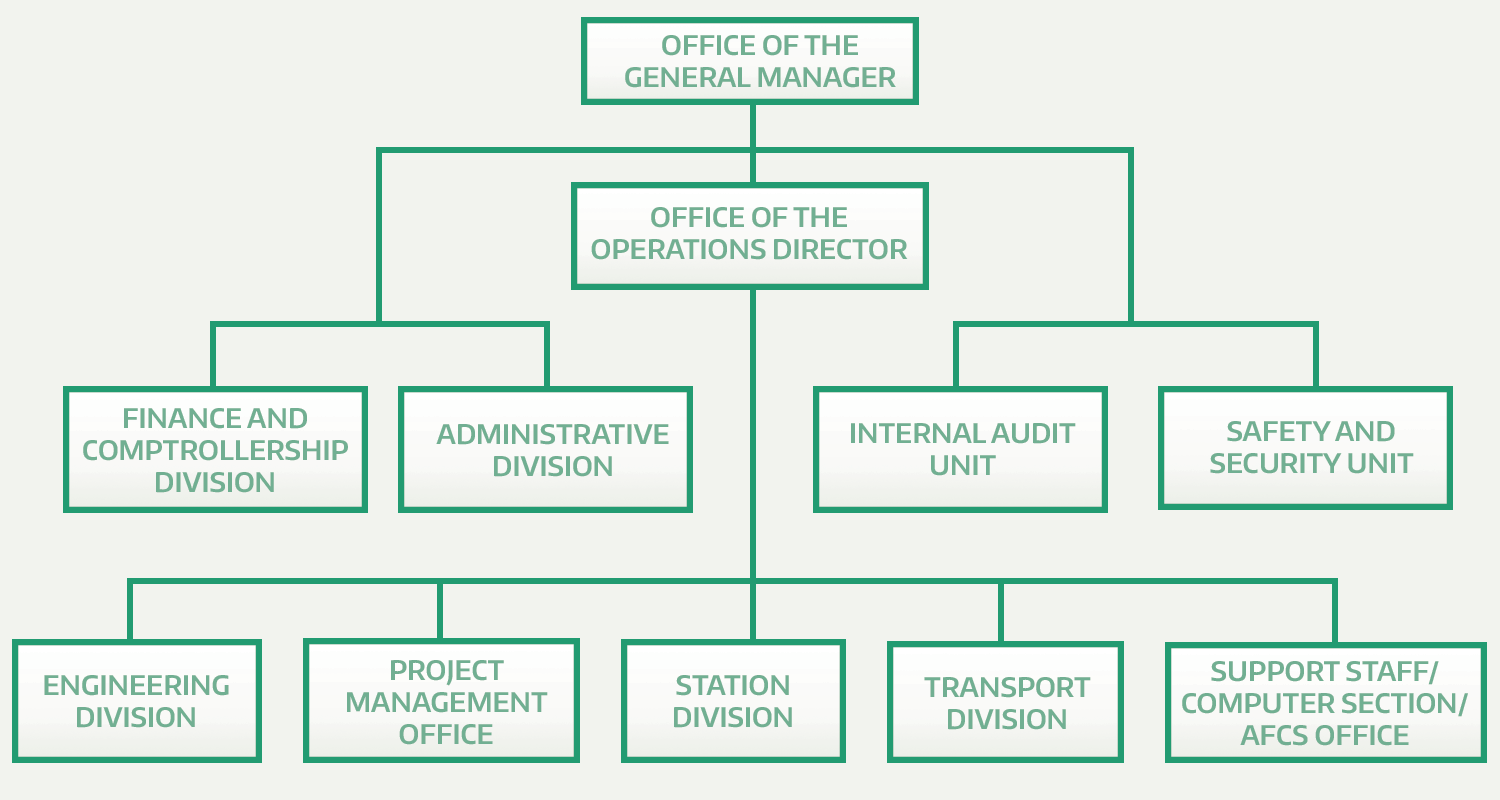 A Citizen’s Charter refers to an official document, a service standard, or a pledge, that communicates in simple terms, information on the services provided by the government to the citizens. It also describes the step-by-step procedure for availing particular service, and the guaranteed performance level that may be expected for that service.

As required by Republic Act No. 9485 (Anti-Red Tape Act of 2007), the DOTC-MRT3 provides riding procedures in availing the services of MRT3. 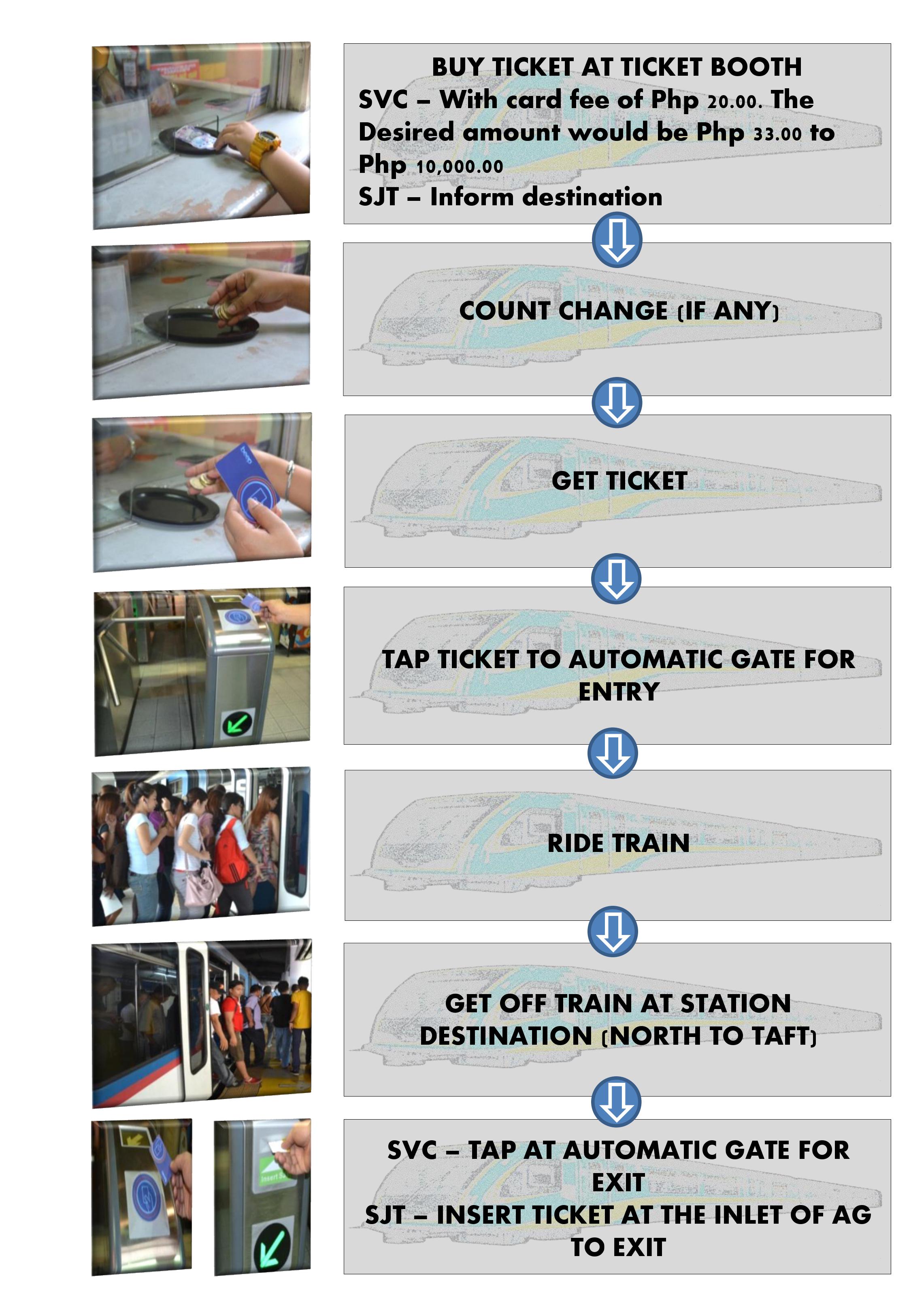 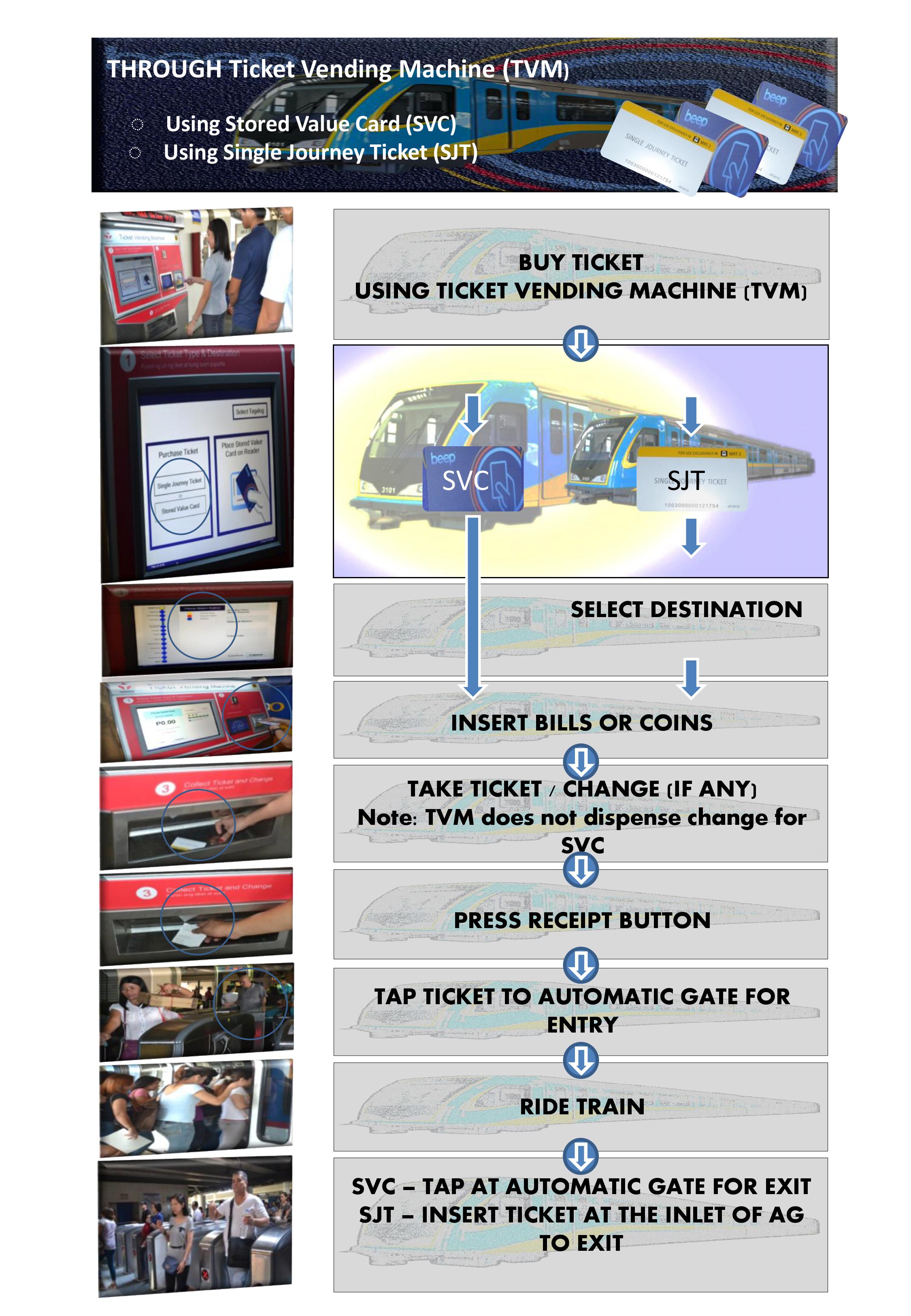 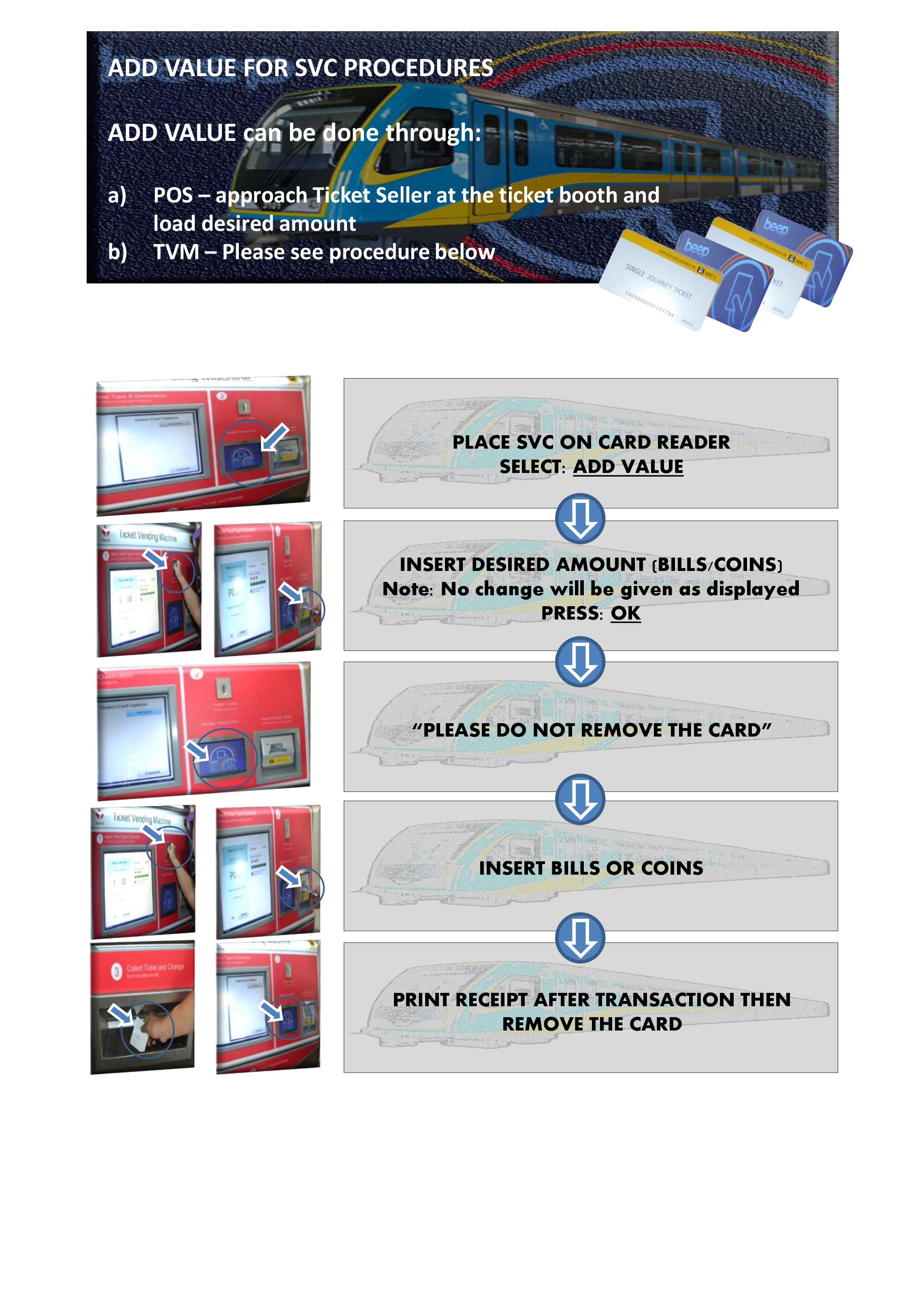